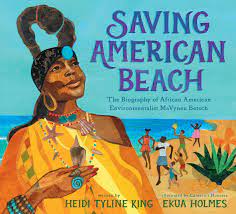 I learned of this new release when I was visiting the Museum of Fine Arts in Boston this past August. At the very end of my afternoon tour, I rounded a corner and…it was “love at first sight”. I was mesmerized and emotionally moved by this masterpiece: 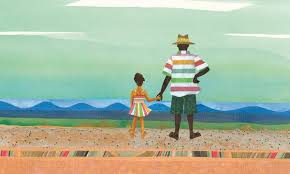 The young girl in the picture was highly relatable: I felt her draw to the ocean and the certainty and togetherness offered in the man’s hand embrace. This, indeed, was a darker-skinned version of the younger me! Since I was visiting the museum by myself, my inner conversation went something like this:

She is just like me ! She is the strongest and calmest by the ocean. It’s the power of the tides, the smells of the sea, the feel of the sand…and the memories of love.

Yes, this is one of the many stunning pages in Saving American Beach: The Biography of African American Enironmentalist MaVynee Betsch. This book follows the hidden life of MaVynee Betsch. King and Holmes pair up to showcase the emotional journey Betsch experienced as an African-American who adored the beach during the Jim Crow era. Her grandfather purchased American Beach (near Jacksonville, Florida) so that African Americans could enjoy the beach. It was here that Betsch discovered her passion and talent for music, leading her to a career as an internationally known opera singer. Following the highs and lows of her life, from childhood to death, the book details the pain Betsch experienced when American Beach crumpled during the post-Civil Rights Act years and the environmentalist actions Betsch took as a result of this tragedy.

After sharing this book with a class of 5th graders, here is a snippet of their conversation:

I didn’t know that during segregation black people weren’t allowed to own things.

But that’s illegal, you can’t do that (privileges of ownership) for some people and not all…

Her dad earned it, then he died and didn’t give it to her ? Or did he, and white people took it away?

Black people, back then, didn’t have many rights so maybe people didn’t care at all.

Why didn’t she walk from there to DC like Martin Luther King? Maybe that would have helped.

I think that this teaches us that it takes a long time to make people care or notice that you are there.

Saving American Beach is the kind of book that keeps readers wondering and talking long after they put the book down. It may have, in fact, moved more than one reader to travel to the Jacksonville, Florida area! 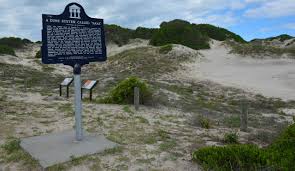 Dear reader, you , too, will experience sadness in your life, often by something that is not your own doing. Will it destroy you, or will you use it for good, like the Beach Lady? -XXOO Heidi Tyline King

View all posts by Rose Vignola