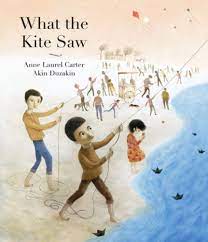 No one is guaranteed peace. Yet, could it be that peaceful days become expected and routine for some of us? In What the Kite Saw, Anne Laurel Carter and Akin Duzakin transport us into the unfamiliar realities of daily life in a warzone. Told from the perspective of a young boy, readers of all ages easily connect to his sense of loss, fear and innocence. The boy’s father and brother have been taken away by soldiers as he remains locked-down in his home. Through his eyes, we experience the unrest of the military occupation in his neighborhood and the emptiness of his dad and brother’s absence in his apartment.  When the curfew is relaxed on a particularly windy day, the boy meets his friends in their beloved park. Later that night, the boy makes his own kite and attempts to fly the kite from his rooftop. He tries several approaches to do this successfully; eventually, imagining it sailing freely and then reporting back to his family about what the kite “saw”. The final scene is left for the reader’s interpretation. The muted illustrations (livened only by color used in the scenes with children) and the symbolism of the kite is noticed by readers of all ages. What the Kite Saw is both heart-wrenching and heart-warming.

Consider with whom you would share this book.  I have shared it with readers ranging in ages from 7 to 81 years old!  Each reading experience prompted conversation about freedom, blessings, hope, and realities of our world. Verity.

View all posts by Rose Vignola